Sister chromatids of replicated chromosomes are paired by virtue of a ring-shaped multi-protein complex, cohesin, which likely encloses the two DNA double strands in its middle (Fig.1a). During vertebrate mitosis cohesin is removed from chromosomes in two waves. The vast majority is displaced by the action of the so-called prophase pathway, which includes the mitotic kinase Polo (Plk1), and which involves phosphorylation of the Scc3 subunit of cohesin. However, a small centromeric fraction of cohesin is unresponsive to this pathway and sufficient to sustain pairing until the end of metaphase. A centromeric protein complex consisting of protein phosphatase 2A (PP2A) and shugoshin 1 (shugoshin = Japanese for guardian spirit) protects this subpopulation of cohesin from the prophase pathway by dephosphorylation and possibly physical shielding. Sister chromatid separation is finally triggered by separase, a large and essential protease, which cleaves the Scc1 subunit of remaining, centromeric cohesin (Fig.1a). Earlier in the cell cycle, separase is held inactive by association with securin, which is degraded via the ubiquitin-proteasome pathway at the metaphase to anaphase transition (Fig. 1a). The corresponding ubiquitin-ligase (E3) is the anaphase-promoting complex or cyclosome (APC/C) in conjunction with its accessory protein Cdc20. APC/C-Cdc20 activity is controlled by the spindle assembly checkpoint (SAC). This multi-component surveillance mechanism creates a diffusible “wait anaphase signal”, which inhibits the entire APC/C-Cdc20 as long as chromosomes do not yet properly interact with the mitotic spindle apparatus. More specifically, a complex of Mad1 and Mad2 (in its „closed“ conformation) is recruited to un- or misattached kinetochores. Here, it catalyzes the conformational change of free Mad2 from its inactive „open“ into an activated transitional state, from which it locks in its „closed“ conformation onto Cdc20. Mad2 then recruits two additional checkpoint proteins, BubR1 and Bub3, to form the so-called mitotic checkpoint complex (MCC) with fully inhibited Cdc20 (Fig. 1b). Only when the last pair of sister kinetochores has properly attached to microtubules from opposite poles, is the source for the “wait-anaphase” signal extinguished and the Mad2-dependent inhibition of APC/C-Cdc20 relieved. 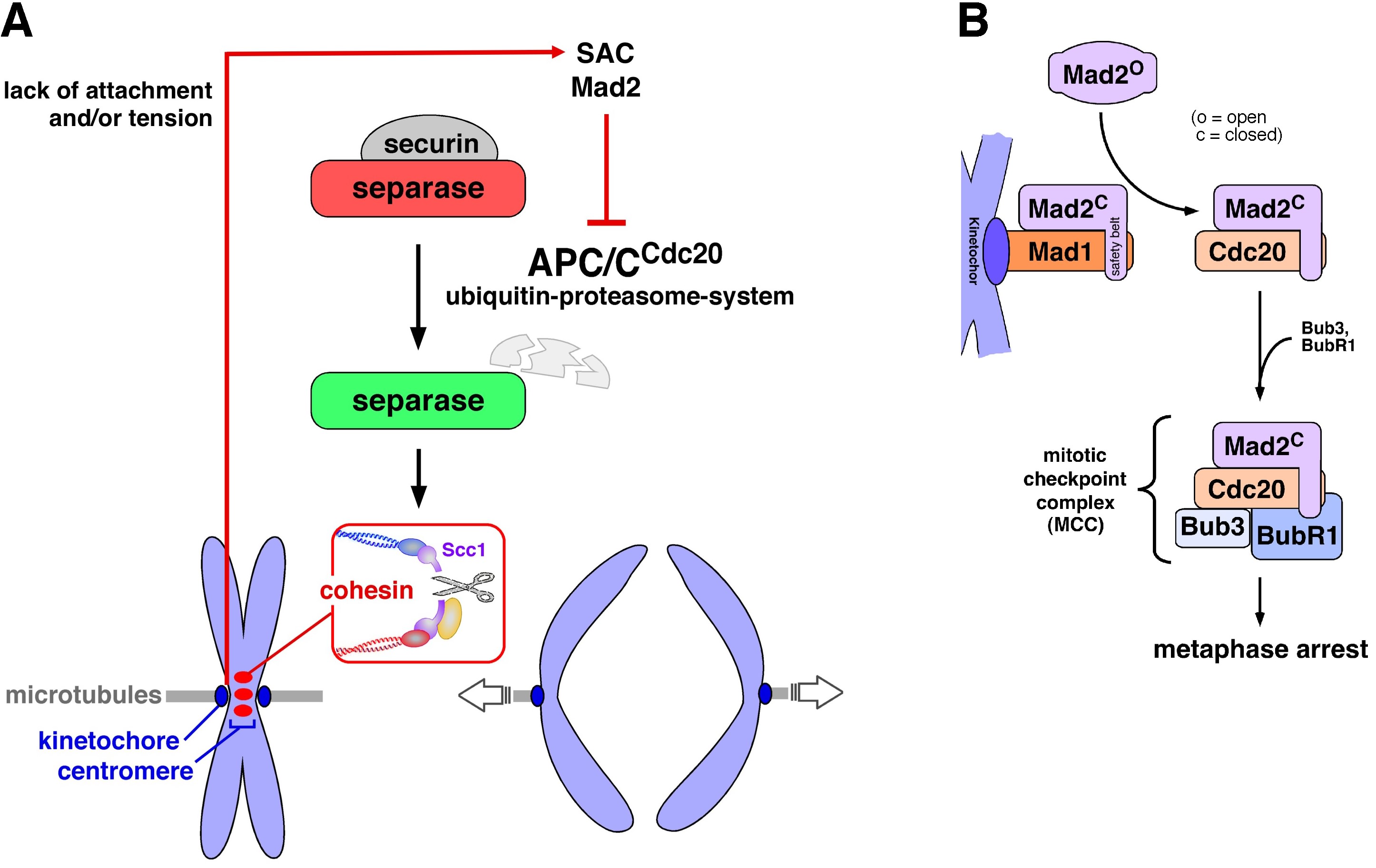 Fig. 1: (A) Model of the metaphase to anaphase transition in eukaryotic mitosis. (Note that the first wave of cohesin dissociation in prophase has been omitted for clarity.) (B) The template model of the spindle assembly checkpoint. In the "closed" conformation, the C-terminus of Mad2 wraps around Mad1 or Cdc20 like a safety belt locks a car passenger.

Despite 10 years of intensive research, separase still holds many mysteries: Active protease either cannot be generated in vitro at all or is very short lived. And nobody has yet been able to obtain detailed structural information on any separase or domain thereof. Given its conserved role as the universal trigger of anaphase, the great variability in length and sequence between separases from different species is hard to reconcile. Several additional functions have been proposed for separase outside of chromosome segregation but they often remain enigmatic. On the regulatory level, it is interesting to note that securin not only has a negative but also a positive effect on separase. However, it is neither understood how securin inhibits (i.e. by competitive or allosteric mechanism) nor how it activates separase. Importantly, securin knock-out mice are viable and have no obvious phenotype strongly suggesting the existence of securin-independent means of anaphase control. While several additional regulations of separase have been identified, most of them remain poorly understood. The stepwise dissolution of sister chromatid pairing in prophase and anaphase of higher eukaryotic mitosis is reminiscent of meiosis. Here, stepwise removal of cohesin from arms and centromeres, respectively, triggers separation of homologues in meiosis I and of sister chromatids in meiosis II (Fig. 2). Again, shugoshin is essential for protection of centromeric cohesin during the first wave of dissociation, with the only difference that in mammals shugoshin 1 is functionally replaced by shugoshin 2. Strikingly, both waves of meiotic cohesin displacement are triggered by separase-dependent cleavage of cohesin (Fig. 2). The cohesin subunit Rec8, which replaces Scc1 in meiosis, is different from its mitotic counterpart in that its cleavage by separase strictly requires phosphorylation. Thus, shugoshin 2-PP2A probably protects centromeric cohesin from proteolytic action of separase during meiosis I by keeping Rec8 in a dephosphorylated state. Centromeric cohesin must be demasked after meiosis I to allow subsequent separation of sister chromatids in meiosis II. This might occur by relocalization of shugoshin from centromeres to kinetochores at the appropriate time. It remains unresolved how this inactivation of shugoshin 2 by relocalization is controlled.

Fig. 2: Stepwise resolution of sister chromatid cohesion ensures the two consecutive nuclear divisions of meiosis. Note that homologous chromosomes are held together by chiasmata (strand exchanges) plus arm cohesion, which is resolved by separase in anaphase of meiosis I. According to the current model, sister chromatids remain paired at this time because shugoshin 2 (Sgo2) mediates dephosphorylation of Rec8 by recruiting PP2A to centromeric cohesin. Following relocalization of Sgo2 in meiosis II, residual cohesin is probably phosphorylated and then cleaved by separase to segregate sister chromatids.

Another function of mammalian shugoshin 2 was described in mitosis. Here, it might be part of a signaling cascade that corrects faulty (merotelic or syntelic) kinetochore-microtubule connections, which do not result in tension. The mitotic kinase aurora B recruits Sgo2 to centromeres, which, in turn, recruits MCAK, a microtubule-depolymerizing kinesin also referred to as "catastrophin". In Xenopus, MCAK was indeed shown to remove "false" k-fibres, thereby liberating kinetochores for a new round of microtubule capture. Shugoshins have only been discovered in 2004. They lack obvious sequence conservation but are rather characterized by a predicted N-terminal coiled coil domain, which is separated from a short C-terminal basic region through a sequence stretch rich in charged amino acids. Shugoshin functions have only been studied genetically, mostly by siRNA-mediated knock-down experiments. Due to lack of any biochemical characterizations or reconstitution experiments, their mode of action remains speculative at the molecular level.