In continuation of our previous research (see below), we are addressing the following key issues: 1) How is separase regulated? We are not only studying the exact mechanisms of how separase is regulated by securin, Cdk1, PP2A, and self-cleavage. At the same time, we also try to identify as-yet-unknown modes of anaphase control. 2) Are there downstream functions of separase other than cohesin cleavage? In this project, we are further investigating the Cdk1-inhibitory role of separase during cytokinesis of female meiosis I and we explore a putative role of separase in the centrosome cycle. 3) How do shugoshins work at the molecular level and how are they regulated? Can we establish assays for shugoshin-PP2A activity, which allow us to ask, for example, how its cohesin protective function is activated and switched off? 4) How exactly does the spindle assembly checkpoint halt cells in metaphase? Are Mad1 and Cdc20 really the only source and target, respectively, of the "wait-anaphase-signal"? Does modeling of the SAC allow us to predict answers to this question and some of the many other unresolved problems of checkpoint control?

Biochemical and Electron-Microscopic Characterization of Separase-Securin Despite its importance, the large separase-securin complex (255 kDa in H. sapiens) has so far evaded structural characterization. To begin to address this challenge, we turned to Thomas Walz who used electron microscopy to determine with 25Å resolution the structure of separase-securin isolated in our lab. The size and whale-like shape of the complex are in good agreement with our hydrodynamic data, which indicated an elongated 1:1 heterodimer. Through differential tagging we determined that the C-terminus of securin co-localizes with N-terminus of separase to the “tail” of the “whale”. Based on bioinformatic analysis by Heidmann and colleagues and by us, the N-terminal half of human separase is predicted to consist of 26 ARM/HEAT repeats and to adopt a highly elongated super-coiled structure. Together these data suggest that the C-terminal catalytic domain of separase localizes far away from its N-terminus. Assuming that securin entertains direct contacts with the protease domain, this has led to the challenging (but hitherto unproven) working hypothesis that the small inhibitor, which is inherently unfolded on its own, might bind to separase in a highly elongated manner similar to the binding of axin to b-catenin.

Vertebrate Securin Is Dispensable for Faithful Chromosome Segregation Viability and mild phenotype of securin knock-out mice contrast with the reported high rate of chromosome missegregation upon deletion of both copies of securin in a human colon cancer cell line. Michael Speicher’s group and our lab have recently shed light on this contradiction by showing that transient chromosomal instability in the human securin-/- cell line soon gave way to chromosomal stability (Pfleghaar et al., 2005). Within a few passages securin-/- cells exhibited a stable karyotype indistinguishable from the parental HCT116 cells. Currently we are investigating whether the high initial rate of chromosome losses is merely a result of the insults that incurred by the deletion process or whether it is due to up-regulation of mechanisms that compensate for the loss of securin.

Cdk1-Dependent Regulation of Separase Dispensability of securin for accurate chromosome segregation strongly suggested an alternative mode of separase regulation. Studying anaphase in cell free extracts, we discovered such a securin-independent mechanism, which is dependent on negative regulation of separase by cyclin dependent kinase 1 (Cdk1). Cdk1 can be considered the master regulator of mitosis. Activation of this kinase is necessary and sufficient to drive cells into mitosis. Conversely, inactivation of Cdk1 by APC/C-Cdc20-dependent degradation of its regulatory subunit cyclin B1 directly correlates with exit from mitosis. Contradicting earlier statements, we have recently shown that the AAA-ATPase p97 is dispensable for spindle disassembly, a hallmark of mitotic exit (Heubes and Stemmann, 2007). Thus, inactivation of Cdk1 might not only be necessary but also sufficient to leave mitosis. We showed that constitutively active Cdk1 blocks anaphase onset by phosphorylation and inhibition of vertebrate separase (Stemmann et al., 2001). This new type of anaphase blockage requires phosphorylation of separase at serine 1126 and at multiple sites within a Cdc6-like domain (CLD) located between position 1340 and 1400. Preventing phosphorylation of separase by mutation of serine 1126 to alanine, for example, is sufficient to rescue sister chromatid separation and cohesin cleavage in extracts with high Cdk1 activity (Fig.1). Confirming the importance of our findings, it was recently reported that introducing the Ser-1126-Ala mutation into just one allele of separase is already enough to cause embryonic lethality in mice but only if securin is lacking at the same time. 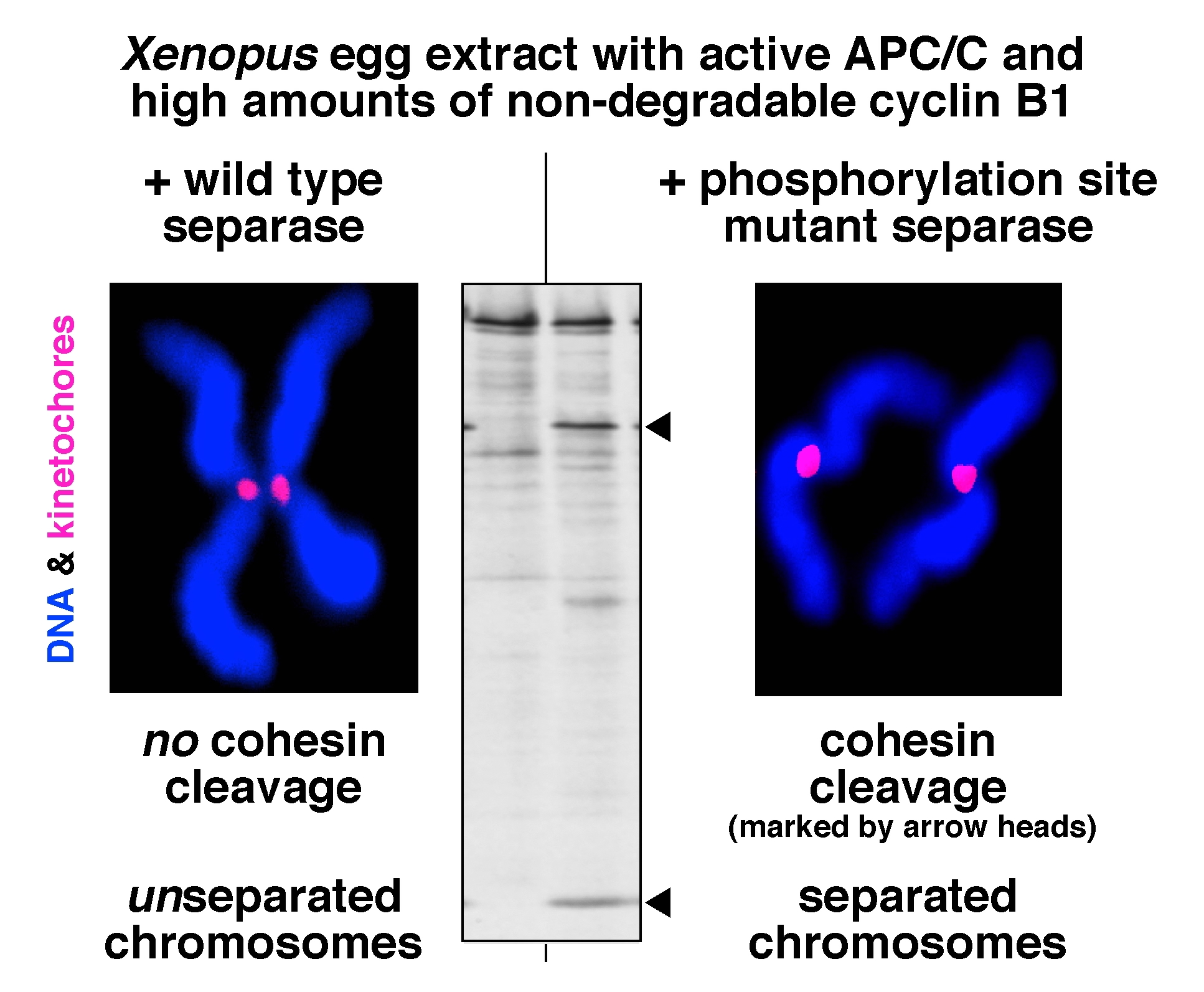 Fig. 1: Constitutive activation of Cdk1 by non-degradable cyclin B1 blocks sister chromatid separation in cell-free extracts.This is independent of securin but instead requires phosphorylation of separase as demonstrated by a rescue experiment using a phosphorylation site mutant.

Securin-less separase, which is re-isolated from an extract with high Cdk1 activity, is phosphorylated and proteolytically inactive. Interestingly, it can be fully re-activated by a simple high-salt wash indicating that phosphorylation - albeit being necessary - is not sufficient for Cdk1-dependent inhibition of separase (Gorr et al., 2005). We proposed that a co-inhibitor from the securin-less Xenopus egg extract would be recruited to phosphorylated separase and, surprisingly, identified this co-inhibitor to be Cdk1 itself. An array of biochemical, mass spectrometric, and cell biological experiments conducted since then (Boos et al., 2008), now allows us to formulate the following multi-step mechanism of separase-Cdk1 complex formation (Fig. 2).

Fig. 2: Model of multi-step complex formation between separase and Cdk1. We propose that phosphorylation of Ser1126 by Cdk1 renders the Cdc6-like domain (CLD) of separase accessible for cyclin B1 by inducing a conformational change. (Cks is a tiny, 3rd subunit of the kinase not mentioned in the text.)

First, separase is phosphorylated on Ser1126 and on several residues within the CLD. (Although Cdk1 targets Ser1126 and Thr1346, Plk1 might phosphorylate Thr1363 and Ser1399.) Of these phosphorylations, the one at Ser1126 likely induces a conformational change in separase, priming it for the final step, namely the stable association with Cdk1. This association occurs primarily via recognition of the phosphorylated CLD of the protease by the regulatory cyclin B1 subunit of the kinase, as revealed by site-specific cross-linking experiments. The proposed conformational change in separase upon phosphorylation of Ser1126 does not activate phosphorylation of the CLD by the corresponding kinases. According to quantitative mass spectrometry, a Ser-1126-Ala mutation leaves the CLD phosphorylation unaffected. Although other explanations are possible, we instead favor that the conformational change allows cyclin B1 to gain access to the phosphorylated CLD by relieving a steric hindrance. This as-yet-speculative explanation is supported by the dispensibility of Ser1126 for the binding of Cdk1-cyclin B1 to short separase fragments, in which the CLD is likely to be freely accessible (Boos et al., 2008). Securin and Cdk1 bind separase in a mutually exclusive manner although their binding sites do not overlap (Gorr et al. 2005). This indicates that binding of each inhibitor induces a conformation in separase that is not recognized by the other. Thus, separase seems to exist in at least three states: „bound to securin and inactive“, „bound to Cdk1 and inactive“, or „free and active“. This as-yet unproven assumption is supported by very different behaviour of the various forms of separase during chromatography and sedimentation experiments.

Separase-Dependent Down-Regulation of Cdk1 in Meiosis I During our studies we have found that, surprisingly, vertebrate separase acts as a Cdk1 inhibitor independent of its proteolytic activity (Gorr et al., 2005). In a purified assay securin-less separase inhibits phosphorylation of histone H1 by Cdk1-cyclin B1. Furthermore, addition of recombinant wild type (but not phosphorylation site mutant) separase to an egg extract overrides a meiotic arrest imposed by non-degradable cyclin B1 (Fig. 3A). Thus, in separase-Cdk1 complexes both enzymes, the kinase and the protease, are held inactive. Separase is an unusually regulated Cdk1 inhibitor in that it becomes unmasked only upon removal of securin.

Fig. 3: Vertebrate separase is a Cdk1 inhibitor. (A) Wild type (but not a phosphorylation site mutant) separase can bind Cdk1 and override a mitotic arrest imposed by stable cyclin B1. (B) Double duty of separase in meiosis. Apart from cohesin cleavage, separase is required for extrusion of the first polar body, presumably by counteracting Cdk1 at the end of meiosis I.

Recently, others and we discovered a requirement of vertebrate separase for the first polar body extrusion (PBE1) – a special form of cytokinesis and visible hallmark of successful completion of meiosis I. Remarkably, this unexpected function of separase is independent of its proteolytic activity - just like its Cdk1-inhibitory function (Gorr et al., 2006; Kudo et al., 2006). In collaboration with Alexandra Reis and Keith Jones, we found that separase might indeed fulfill this unanticipated task during PBE1 by antagonizing Cdk1 at the end of meiosis I (Fig.3B). Anti-separase peptide antibodies, which specifically block association with Cdk1 but not securin binding or cohesin cleavage, prevented PBE1 upon micro-injection into oocytes. Importantly, PBE1 was rescued in presence of these antibodies by chemical inhibition of Cdk1 or transient expression of a Cdk1-binding separase fragment (Gorr et al., 2006). In our hands, control oocytes displayed lower Cdk1 activity at their time of PBE1 than time-matched oocytes injected with anti-separase antibodies. However, taking a conditional knock-out approach, Kudo et al. (2006) found normal Cdk1-inactivation at the end meiosis I. Thus, although our findings are consistent with the known fact that Cdk1 is a strong inhibitor of cytokinesis, how much of Cdk1 is counteracted by separase at the end of meiosis I remains to be clarified.

The Interaction of Vertebrate Separase with Protein Phosphatase 2A (PP2A) Budding yeast separase promotes mitotic exit by negatively regulating PP2A-Cdc55 (Queralt et al., 2006). Independently, the labs of Stephen Taylor and myself recently identified PP2A as a new binding partner of human separase (Holland et al., 2007). Crucial differences strongly suggest that separase-PP2A might actually serve a different function in vertebrates than it does in yeast: 1) Different subtypes of PP2A interact with separase in both phyla, with PP2AB56 being the form that binds the human protease. 2) The PP2A-binding site on separase was mapped. A small internal deletion, which renders separase unable to bind PP2A (âˆ†55-separase), exhibits no obvious delay in mitotic exit. 3) In human cells, the interaction is strongly impeded and, thus, regulated by separase self-cleavage (probaly due to overlap of the PP2A binding site with the region of self-cleavage). Vice versa, premature separation of sister chromatids caused by overexpression of non-cleavable separase can be reversed by additional deletion of the PP2A binding site in separase. Notably, separase self-cleavage does not even occur in yeast. 4) While S. cerevisiae separase counteracts PP2ACdc55 upon degradation of securin, we could show for the human proteins that a heterotrimeric PP2A-separase-securin complex does exist and that separase-associated PP2AB56 is catalytically active. We are currently trying to elucidate the physiological role(s) of the separase-PP2A interaction (and the antagonistic self-cleavage of separase) in vertebrates.

Interplay between Shugoshin-PP2A and the Spindle Assembly Checkpoint Lack of any biochemical activity assay leaves unanswered the question of how exactly shugoshin-PP2A protects cohesin from the prophase pathway in mitosis and from separase in meiosis I. Likewise, it remains unclear how cohesin protection by shugoshin-PP2A is switched off after meiosis I. Furthermore, yeast genetics strongly suggests additional, yet ill-defined functions of shugoshin in spindle assembly checkpoint and monopolar attachment of sister kinetochores during meiosis I. We have recently engaged in addressing some of these issues in vertebrate systems. Furthermore, we have initiated a collaboration with the group of Naama Barkai (Weizman Institute) to analyse the SAC in a quantitative manner.