Research in our group focuses on problems that deal with the structure, function and dynamics of components that influence the segregation of eukaryotic chromosomes during cell divisions. In this field we concentrate on three areas, which we work on employing the model organism, Drosophila melanogaster. In our work, we combine the established and powerful classical genetics of Drosophila with biochemical and cell biological approaches. 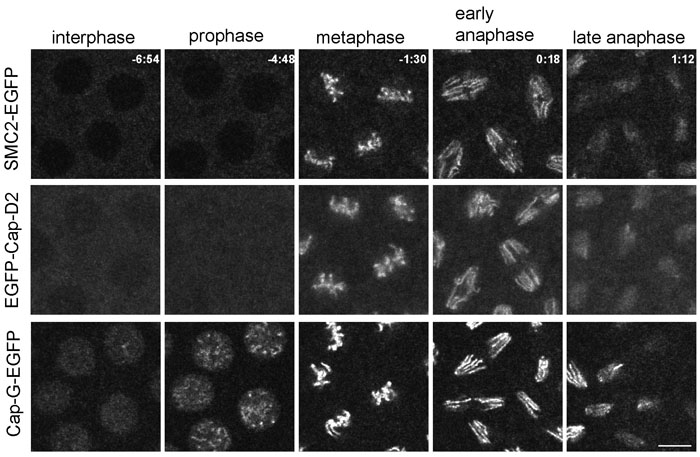 I) Dynamics and function of the condensin subunit Cap-G

The typical eukaryotic chromosome is converted into an easily manoeuvrable entity during mitosis. To prevent the replicated chromatids from becoming entangled during segregation, they are compacted and individualized in a process called chromosome condensation. Key players in the establishment and maintenance of a proper mitotic chromosome structure are the condensin complexes. Two complexes, condensin I and condensin II, have been described in higher eukaryotes. The two complexes share the same structural maintenance of chromosomes (SMC) subunits SMC2 and SMC4, but differ in the set of non-SMC subunits. Condensin I contains Cap-H, Cap-G and Cap-D2, while condensin II contains Cap-H2, Cap-G2 and Cap-D3. The SMC subunits form active ATPase domains by heterodimerization and the non-SMC subunits assemble on the ATPase heads of these heterodimers. While in vitro assays have shown the ability of these complexes to introduce positive supercoils into DNA, the mode-of-action of these proteins in vivo remains to be clarified. The prominent phenotype of condensin subunit depletion by RNA interference or mutation is the occurrence of entangled chromosomes during mitosis resulting in so-called anaphase bridges. We have initiated analyses aiming at elucidating the functional role of the Drosophila melanogaster non-SMC subunits, mainly Cap-G. The analysis of Cap-H/Barren, performed in collaboration with the laboratory of Prof. Dr. Claudio Sunkel in Porto, Portugal, has revealed important insights about the highly dynamic interactions of this protein with chromatin (Oliveira et al., 2007). We have investigated in a similar manner Drosophila Cap-G, Cap-D2 and SMC2 and have found that Cap-G shows distinct differences in its localization dynamics when compared to the other subunits. In addition, our results imply that Cap-G does not participate in condensin II-like complexes in the fly (Herzog et al., 2013). A participation of Cap-G in condensin II was suggested by the fact that the Drosophila genome does not encode a clear Cap-G2 homolog. 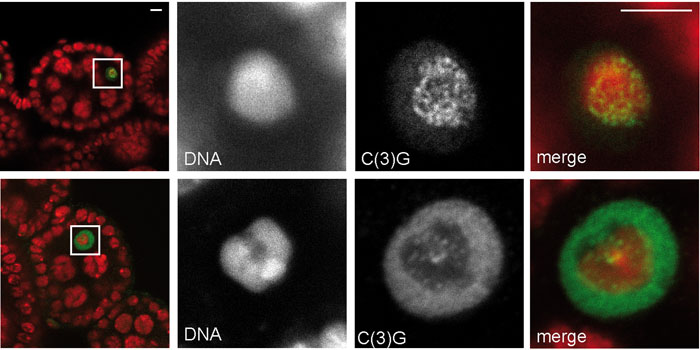 Replicated sister chromatids are joined together until the metaphase-to-anaphase transition by the cohesin complex, which is related to the condensin complexes described above. At anaphase initiation, a protease (separase) is activated and cleaves the Rad21/Scc1/Mcd1 subunit of the cohesin complex, thereby releasing cohesion and allowing sister chromatid segregation. During meiosis, sister chromatid cohesion needs to be resolved in two steps. In the first step, homologous chromosomes are disjoined during meiosis I, but the sister chromatids stay associated until meiosis II, when the residual cohesion connecting these DNA strands is removed in a second step. Characteristic for meiotic divisions is also the fact that Rad21/Scc1/Mcd1 is replaced by its meiotic-specific homolog Rec8. Bioinformatic analyses have so far failed to reveal a clear Rec8 candidate in Drosophila. The best hit, C(2)M, is meiosis-specific and required for the meiotic exchange of genetic material during recombination. However, its association dynamics with meiotic chromatin and functional analyses argue against it being the sole meiotic Rad21/Scc1/Mcd1 homolog (Heidmann et al, 2004). In collaboration with Prof. Christian Lehner, University of Zurich, we have further examined the role of Rad21 in female meiosis and have found that it does not appear to confer a cohesive function. However, Rad21 is clearly required for the maintenance of the synaptonemal complex (SC) during early stages of meiosis (Urban et al., 2014). The SC is a threadlike structure aligning the homologous chromosomes and it serves as a prerequisite for double strand break induction and subsequent crossover formation allowing homologous recombination. 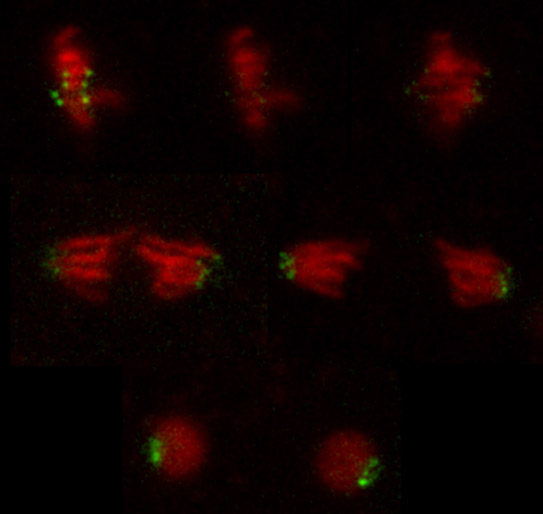 The compilation shows time lapse images of a fluorescent recovery of photobleaching (FRAP) experiment. A single metaphase plate in a syncytial Drosophila melanogaster embryo expressing the red fluorescent labeled histone variant His2Av (His2Av-mRFP1) and the green fluorescent labeled centromere component Cid (EGFP-Cid) was irradiated with a high power 488 nm laser beam. The images show the metaphase plate before bleaching, the disappearance of the dot-like green centromeric signals after the photobleaching event and the recovery of the fluorescence during anaphase/telophase of the same mitosis. The intriguing fact here is the fast recovery of EGFP-Cid demonstrating incorporation during late mitosis

The kinetochore is a high-molecular complex, which serves as the attachment site for the microtubules of the mitotic and meiotic spindle apparatus during cell divisions. For faithful chromosome segregation, it is crucial that every replicated chromatid contains only one functional kinetochore. Thus, it is an important question which mechanism ensures that only one kinetochore is assembled on each chromatid. Of similar importance is the determination of the location, where a kinetochore is assembled. A wealth of information indicates that the centromeric histone H3 variant Cenp-A plays a crucial role in defining the location of a centromere within a chromosome. What determines then the correct deposition of Cenp-A? As the underlying DNA sequence is neither strictly required, nor sufficient for Cenp-A incorporation, an epigenetic mechanism must be on play. In order to elucidate this mechanism, we are investigating the incorporation of the Drosophila Cenp-A homolog CID during the early embryonic divisions. Using in vivo imaging of fluorescently tagged variants of CID and also of the Drosophila Cenp-C homolog, we have been able to demonstrate that during the early embryonic nuclear divisions these two proteins are incorporated into chromatin during mitosis (Schuh et al., 2007). Further studies will allow us to unravel mechanistic details and the identification of factors involved in this process.